Cleveland and it’s parent company Srixon Golf have been in the news (at least on this website) a lot lately. Srixon is introducing a new line of clubs that will ship in October, and from the looks of them they will do well. Click HERE to see them. The Srixon line, dubbed Z-TX, have already done very well in Japan, and now will be available for the US market. I currently play with the Srixon i701 Tour irons which have been around for a while, so I’m excited to see the new offerings. Srixon should see an increased market share in the US, with the growing use of it’s Z-Star golf balls on the professional tours garnering more attention among consumers.

The latest offering from Cleveland Golf is the new CG7 and CG7 Tour Black Pearl irons. Available in November, these irons are essentially the same as the original CG7 and CG7 Tour, except for the black pearl finish that Cleveland has made famous in it’s wedges and CG1 irons. What does this mean? Well, it means they’ve taken a nice looking club and made them gorgeous. We don’t have many details on these, but we know that the CG7 will retail for $699, and the CG7 Tour will go for $799. They also appear to sport Cleveland’s new Laser Etched grooves, which will be available on the new CG15 wedges also. Both sets also qualify for Cleveland’s Free Irons Promotion. If you purchase a set of Cleveland Irons, you will be eligible to trade in your set for any of the new models of equal or lesser value introduced from January 2010 to December 2011 at no charge. All you have to do is buy your set at an authorized Cleveland Golf dealer and register your purchase on their website.

Enjoy the sneak peak pictures, and check out the full review right here! Subscribe to email updates and the RSS feed to get the latest stories delivered as they come out! 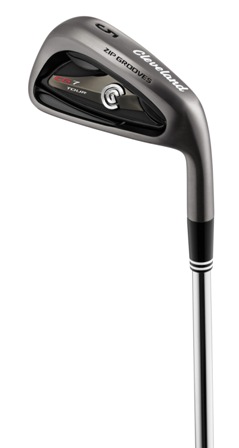 The only question mark for me is, although the black pearl finish is gorgeous, black pearl finished clubs are notorious for their lack of bendability. I had a set of the old TA3 irons with the black finish, and my club maker insisted he could bend them. He did indeed bend them. One broke in the bending machine, and two others broke shortly after on the range, leaving me with three shafts with nothing but a hosel attached and a lack of faith in Cleveland Clubs. The bottom line is, if you get them custom fit from Cleveland you’ll be fine. Just stay away from having someone bend them after the fact. Thanks for visiting!