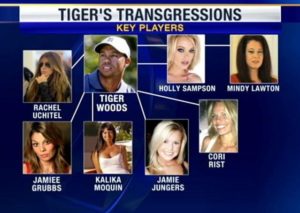 The Tiger Woods story just won’t die. I suppose we should all have seen this coming when he (allegedly) paid Rachel Uchitel to stop talking. Now, every other Woods mistress is coming out of the shadows for their 15 minutes and big payoff, whether it be from Tiger or the bloodthirsty tabloid media. Golf fans all around the world are holding their heads down in shame, for their squeaky clean superstar is now being dragged through the mud by the media in a desperate attempt for ratings, page views and dollars.

Being that intothegrain.com is a form of media, I suppose I sound like a hypocrite by accusing the media of not leaving well enough alone while I sit here talking about the very story I want to see go away. However, this isn’t just the biggest story in golf at the moment, it’s one of the biggest stories period, and it deserves it’s attention. Everywhere you turn on the television was an update, or a joke, or a SNL skit about Tiger. Every few hours it seems a new mistress is coming out and telling her story. During the NFL game Sunday between the Jacksonville Jaguars and the Houston Texans, A blonde woman with a huge plastic golf club started chasing a person in a tiger costume and a red shirt around the stadium. You can’t get away from the story. Hell, I’ve deleted more Tiger Woods joke emails this week than I care to remember. This story is now out of control. Chris Mathews and Nancy Grace are even talking about it!

And so in the last few days we have seen the so called Mistress Meter rise to a number between 7 and 10, depending on what smut magazine you read in the grocery line. I’m not going to comment as to which ones are lying or telling the truth, or give you details about where and when. Go to a tabloid for that. I am also hearing reports that his wife Elin has moved out and is considering divorce. Of course, this information will likely change in a matter of hours as the wave of inaccuracy and speculation spreads all over the internet.

As a golf addict and internet blogger, all I want to do is write about golf. I’m not thrilled about covering this story because it is mostly about family, marriage, children, scandal and public image. I don’t want to see a family torn apart, and I don’t want to see a man’s image tarnished by the press, but ultimately he brought it upon himself. Tiger Woods’ private life has always been well guarded, learning from others like Micheal Jordan and Shaquille O’Neal. Obviously, what happens behind closed doors in the Woods home is none of our business, but because it has now become everyone’s business, maybe Tiger himself needs to come out and set the record straight. This story has become a raging fire, and Tiger himself is probably the only one that can begin to smother the flames…

For more info and the latest articles and stories, subscribe to our RSS feed and email updates! You’ll get the latest fresh news, reviews and stories delivered right to your inbox or RSS reader! Also, don’t forget to check in with our Facebook fan page and get involved by leaving us comments on what you think!